The number of displaced, marginalized and impoverished people continues to grow. How we handle this will determine mankind’s future 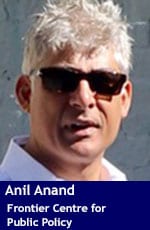 At any given time, there are about 20 million people on the move in the world. When there’s war, terrorism, extreme weather events or other disruptions, this can grow to 80 million people trying to get to safety.

We hear of illegal immigrants crossing borders and thousands of people walking north through Central America to the U.S. border. What we don’t hear about is why. We also don’t hear many politicians talking about addressing these people’s problems at their origin, rather than at our borders.

It’s imperative we address these problems. We need to help create sustainable communities – not just for the people in them but for our sake as well. What happens in one part of the world reverberates everywhere.

Rapid urbanization has resulted in highly concentrated centres of population with increasing disparities in standards of living. These create conditions ideal for social conflict and disease.

According to the United Nations, 54 per cent of the global population now lives in cities, and that will increase to 68 per cent by 2050. The majority live in starkly marginalized conditions.

The United Nations High Commissioner for Refugees (UNHCR) estimates 13.6 million people were displaced due to conflict or persecution in 2018, equivalent to an average of 37,000 people being forced to flee their homes every day in 2018.

There were 70.8 million displaced people worldwide in 2018, as a result of persecution, conflict, violence or human rights violations.

At the same time, Western citizens are increasingly dissatisfied with the distribution of opportunities, wealth and living standards. There are increasing concerns about the impact of the fourth industrial revolution – the embedding of micro-technology and artificial intelligence into traditional technologies and services, threatening jobs and potentially displacing large numbers of people.

These two trends have provoked fears that fuel nationalism, anti-immigrant reactions and eroded confidence in the existing pillars of the post-Second World War world order: democracy and capitalism.

Skepticism with politicians has added to dissatisfaction with traditional authoritative structure and renewed demands for democratic reform.

Thierry de Montbrial of the French Institute of International Relations notes: “There is a social revolution with a growing demand for participatory democracy. The traditional system of enforcing power from top to bottom is increasingly being challenged.”

The Occupy Movement, violent protests against the world order represented by the G8, the Yellow Jacket Movement, protests in Chile, Lebanon, Paris, Hong Kong, the move to withdraw Britain from the European Union, and the United States’ withdrawal from several international treaties are signs of changing attitudes and values. Politicians seem unable to agree on how to respond to these challenges.

But there’s another serious threat, one posed by extreme marginalization in emerging economies and democracies.

While Westerners respond to our inner city issues of poverty, lack of housing, elevated crime and physical neglect, most cities in developing economies must deal with slums. These are areas of extreme overcrowding, dehumanization and neglect. In some cities, slum dwellers represent up to 80 per cent of the population.

Tens of millions in Mumbai, Calcutta, Rio de Janeiro, São Paulo, Mexico City, Johannesburg, Nairobi, Bangkok and Manila live in slums with such dire conditions that their extreme marginalization is incomprehensible to those on the other side of the poverty line.

According to the World Health Organization (WHO), slums are home to an estimated 828 million people, a third of the world’s urban population. That number could reach three billion in the next 30 years. This explosion will result in mega cities that will greatly surpass New York, Los Angeles and London.

The World Economic Forum projects that Lagos will have a population of 88 million, Dhaka 76 million and Kinshasa 63 million.

Exposure to crime, violence and the stress associated with constant fear for one’s safety within slums creates high levels of mistrust and low social capital, providing ideal conditions for conflict over resources, establishment of gangs, trade in illicit substances, arms, and human trafficking, and the radicalization of youth.

The Tony Blair Institute for Global Change has warned of the danger of ignoring school-aged children who are particularly vulnerable to radicalization by jihadi recruiters.

Slums also offer ideal conditions for the incubation of marginal and obscure microbes, and as gateways for the transmission of pathogens and new strains of infectious diseases.

Global connectivity means the mass migration of people for economic, political or environmental influences will increase in the 21st century. As Filippo Grandi, the United Nations high commissioner for refugees, notes: “What we are seeing in these figures is further confirmation of a longer-term rising trend in the number of people needing safety from war, conflict, and persecution.”

The global impact of famine, conflict and disaster has changed, as must our preparedness and response.

The challenges of marginalization have reached manifestly catastrophic conditions, and the choices we make this decade will determine the fate of human societies for millennia.

The question for policy-makers and politicians should not be what to do about the endless cues of illegal migrants at our borders, but how we mitigate the global inequalities that drive mass migration?

These goals were to have been achieved by 2015.

Having failed, in 2015 the UN passed a new resolution on transforming our world: the 2030 Agenda for Sustainable Development, with a new set of goals to be achieved by 2030:

Humanity is interwoven into a complex web; what happens in one part of the world will reverberate throughout the globe. It’s time to see transformative change.

Anil Anand is a research associate with the Frontier Centre for Public Policy.